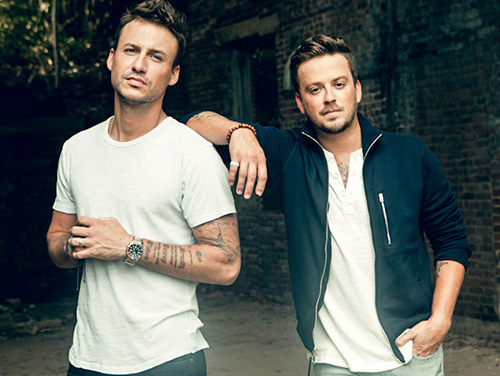 Originally a trio that also included fellow singer-songwriter Brian Bandas, Love and Theft first galvanized fans in 2009 with the Top 10 hit “Runaway.” That breakthrough success set the stage for their debut album World Wide Open, which also produced the hit single “Dancing In Circles.” After a move from the Disney-affiliated Carolwood label to RCA, Stephen and Eric scored their first #1 single with “Angel Eyes,” which was featured on Love and Theft’s self-titled second album, along with the hits “Runnin’ Out of Air” and “If You Ever Get Lonely.”

The longtime partners agree that their potent musical chemistry is a reflection of their personal rapport. “The thing about us,” Eric asserts,” is that we really are best friends, and that’s helped to get us through the tougher times. At the same time, though, we’re different enough personality-wise that the combination works. Stephen’s naturally a more social person than I am, and I’m a little more introverted. He tends to see the best in every person and every situation, and I’m kind of the opposite. My songwriting’s different from his, and when we’re in the studio, his approach is different from mine. The way we play guitar is different. The way we arrange songs is different. But our differences come together to make something that each of us couldn’t do on his own.”

The pair’s second-nature chemistry led them both to agree that the occasion of their third album called for the bold musical statement that Whiskey On My Breath would ultimately become.

“In some ways, we’ve played it safe in the past, and I think we’re over that now,” Stephen observes. “It’s easy to fall into that when you’re working in the Nashville system and trying to please everybody. But eventually you come around and realize that you need to be true to yourself. I don’t mind that songs like ‘Whiskey On My Breath’ and ‘Everybody Drives Drunk’ may be a little controversial, because they’re honest, and I think that they’ll make people think about how they feel about life.”

“Those songs are both really personal for us,” Eric notes. “They show a side of us that’s legitimately us, and how we’ve grown up and matured in the time that we’ve been in this business. But there are plenty of songs on this album that are just good, fun songs, and that’s still a side of us too.”

Indeed, Whiskey On My Breath makes it apparent how far the duo—who’ve both become husbands and fathers in the six years since they began their recording career—have traveled, and demonstrates that they’re in for the long haul.

“We feel more strongly about this record than anything we’ve ever done,” Eric concludes. “Whatever happens, we’ve made a record that we both love and that we can both stand behind, and that’s a great feeling.”